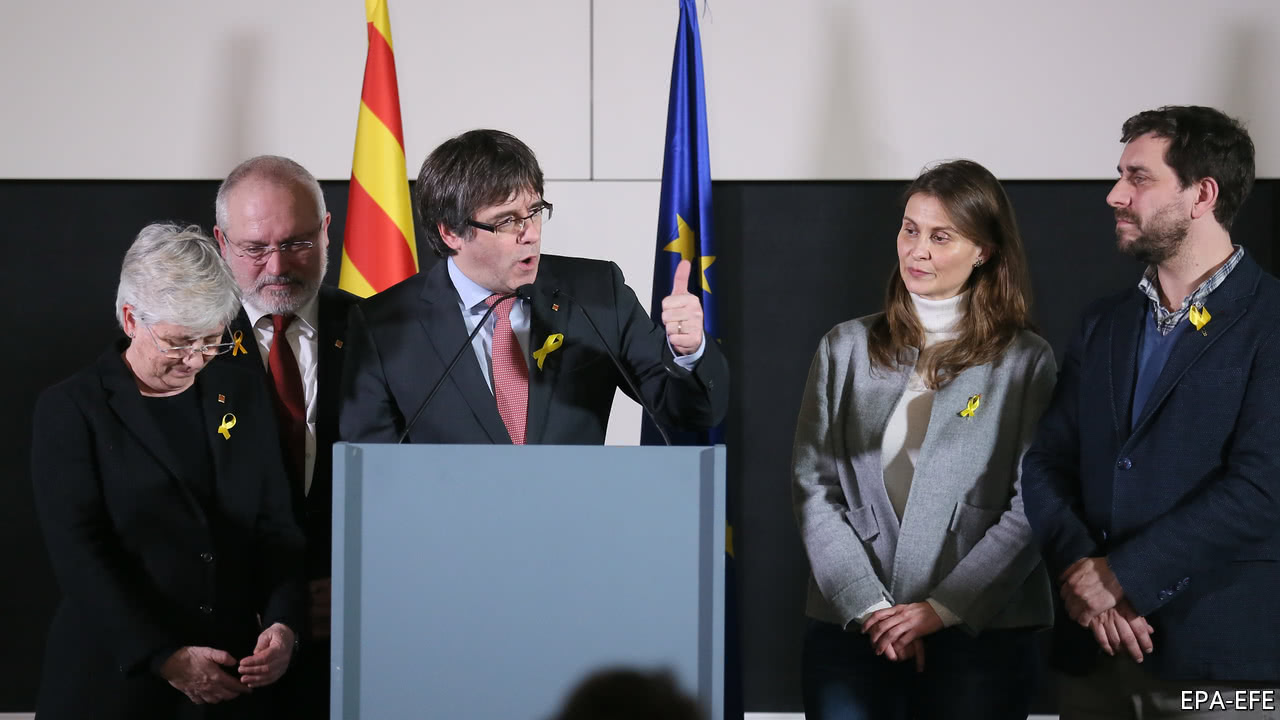 Catalonia’s separatists are re-elected by a whisker

AFTER the momentous events of the past few months in Catalonia, the regional election on December 21st suggests that, remarkably, not much has changed. A record turnout of 83% of the electorate of 5.5m has delivered a parliament with a narrow majority of separatists, just what it had been before it was dissolved.

That is bad news for Mariano Rajoy, Spain’s prime minister, and his efforts to keep his country together. True, in a symbolic blow to the cause of Catalan independence, Ciudadanos, a centre-right anti-nationalist party, became the largest political force, albeit with only 25% of the vote. On the other hand, the list of Carles Puigdemont, the fugitive regional president, outpolled Esquerra (Republican Left), the party of his jailed former coalition partner, Oriol Junqueras. Widely written off a month ago, Mr Puigdemont is perhaps the biggest winner of the election, and will demand his reinstatement as president. (Read more)

Malcolm Turnbull’s attempt to paraphrase Chairman Mao last week was not just a mildly farcical example of political theatre. It also marked an important turning point in a decades-long debate over how the west should respond to China’s rise. “Aodaliya renmin zhan qi lai! The Australian people have stood up,” the country’s prime minister told reporters in mangled Mandarin — a deliberate echo of Mao’s declaration in 1949 that the Chinese people had stood up, thus ending a century of humiliation at the hands of colonial aggressors. Mr Turnbull was defending new Australian laws drafted this month which are designed to limit the influence of foreign governments and which have one particular target in mind — the Chinese Communist party. (Read more)

All Is Not Forgiven

South Africa and the Scars of Apartheid

In old black-and-white photographs, the antiapartheid activist Ahmed Timol looks elegant, with an open face and a ready smile. One classic shot captures him midstride. Clad in dark sunglasses with a pipe dangling from his mouth, he has the dashing air of a 1950s film star. Shortly after that photo was taken, on October 25, 1971, Timol—a member of the South African Communist Party—was arrested. Two days later, he was dead. His body was found on the pavement outside the headquarters of the notorious Security Branch of the apartheid police in Johannesburg. An inquest overseen by an apartheid judge determined that Timol had committed suicide by jumping from a window. He was not yet 30. (Read more)

The United States government recognized President Juan Orlando Hernández of Honduras as the winner of last month’s disputed election on Friday amid angry protests by Hondurans who believe the vote count was fraudulent.

The decision by the State Department offers support to an ally who has cooperated on issues that concern Washington in Central America — including stemming the flow of illegal drugs and migrants to the Texas border.

Honduras has shown its loyalty elsewhere. It was one of only eight countries to vote with the United States on Thursday against a resolution at the United Nations denouncing President Trump’s recognition of Jerusalem as Israel’s capital. (Read more)

Russia’s leading environmental activist is one of more than a million people – many of them young and well-educated – who have packed their bags and left the country in recent years, writes the BBC’s Lucy Ash. Russian even has a word for the phenomenon, “poravalism”.

“Do I feel homesick?” says Evgenia Chirikova. “Not really. Lots of people here speak my language. They are friendly, energetic and curiously polite. I’m living in the Russia of my dreams!”

She’s talking about Estonia, her home for the last two-and-a-half years – a refuge from the persecution she faced as an environmental campaigner and an outspoken critic of Russian President Vladimir Putin. (Read more)