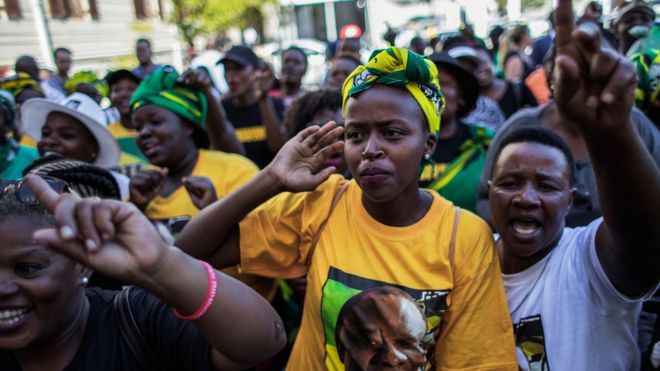 Zuma’s fall a chance to take moral leadership in Africa

It is rare in a journalistic life that one gets to sit a few yards from a president as he announces his resignation and then, within the same 24 hours, stand in the presence of his successor as he is sworn in.

More so when it happens without a shot being fired or vast crowds taking to the streets.

But South Africa has always been a nation to surprise. And to infuriate. And to inspire.

It is like no other country I have ever reported from.

From my first experiences in the apartheid 1980s to the rise of President Cyril Ramaphosa, it has frequently havered between the possibility of disaster and triumph, sometimes accommodating both possibilities within the space of a single day.

The fall of Jacob Zuma came about, in part, because of several uniquely South African dynamics. (Read more)

In Uzbekistan’s ancient Silk Road city of Samarkand, near the blue-domed madrassas of central Registan Square, young Uzbeks still jostle for selfies by the statue of a local boy made good, the late dictator Islam Karimov. But, 17 months after Karimov’s death, there are signs that a country that democracy watchdog Freedom House long ranked alongside North Korea on political rights and civil liberties is starting to loosen the screws.

Karimov’s successor, Shavkat Mirziyoyev, laid flowers at Karimov’s statue late last month on what would have been his 80th birthday. The next day he took a step that a year ago would have seemed unimaginable. He sacked, or at least moved aside, Uzbekistan’s secret police chief of 23 years, Rustam Inoyatov. A key Karimov henchman, Mr Inoyatov, was a pillar of a system known for imprisoning, and often torturing, political opponents, journalists, human rights activists and Islamists.

While Mr Mirziyoyev was part of the old system too, as prime minister for 13 years, his ousting of Mr Inoyatov was the boldest in a series of steps apparently designed to start opening the country up. He has freed 18 high-profile political prisoners — even if thousands more remain in jail — and taken nearly 16,000 people off a 17,500-strong security blacklist of potential extremists that stopped them travelling or getting jobs. (Read more)

Sergei Lavrov, Russia’s foreign minister, has rejected claims that 13 of his country’s citizens carried out an audacious plot to influence the 2016 US election in favour of Donald Trump.

Mr Lavrov dismissed the allegations as “blabber” after US prosecutors filed an indictment yesterday that gave the most vivid glimpse yet of the scale and sophistication of Russian efforts to “sow chaos” in US democracy.

Appearing at the Munich Security Conference, Mr Lavrov was asked for his response to the development. He said: “I don’t have a reaction because anything and everything can be published. We see how accusations, statements, are multiplying.”

Insisting that US officials such as Mike Pence, the vice-president, had already denied Russian involvement in President Trump’s election, he added: “Until we see the facts, everything else is just blabber.” (Read more)

Italy used to be a tolerant country, but now racism is rising

Pape Diaw, originally from Senegal, arrived in Florence to study engineering in the late 1970s. Part of a group of 15 African students, he inspired curiosity among his Italian counterparts and the wider community, but never encountered racism. “I remember walking along the street and people would ask to have a photo taken,” he said.

“We were seen as a novelty, but never insulted. When we went to process our residency permits, the police officers would give us coffee.

“Yes, Italy might have been behind [other countries] when it came to cultural mindset, but we were well-received.”

Different times. Ahead of national elections on 4 March, xenophobic rhetoric is dominating a campaign that has turned nasty and divisive. Matters took a toxic turn earlier this month, when 28-year-old Luca Traini injured six African migrantsin a racially motivated shooting spree in the central city of Macerata. (Read more)

‘America first does not mean America alone,” President Trump declared last month at the World Economic Forum in Davos, Switzerland. This sudden burst of pragmatism from an avowed nationalist showed what a difference a year can make. Denouncing the “false song of globalism” during his presidential campaign, Trump, on his third full day in office, canceled the Trans-Pacific Partnership, a regional trade deal with Japan and 10 other countries. He then denounced Canada, Germany and South Korea for exporting more to the United States than they import. He promised to renegotiate trade pacts with Europe, Canada and Mexico and get a better deal for American workers. In Davos, however, he reached out with conciliatory words to the very free-trading and globalizing elites he has consistently maligned.

Clearly, Trump’s views on trade and globalization have evolved since his insurgent campaign. This may well be because of the rapid gains in the past year of a country he did not mention by name. In fact, Trump chose in Davos to affirm that “America is open for business” because it was in these same Alpine heights, three days before Trump was inaugurated as president, that China seized the opportunity to claim leadership of the global economy. With the United States seemingly in a protectionist crouch, China had become, despite all its problems, indispensable. “In a world marked by great uncertainty and volatility, the international community is looking to China,” Klaus Schwab, the founder of the World Economic Forum, said last year while introducing his guest, the Chinese president and general secretary of China’s Communist Party, Xi Jinping. (Read more)