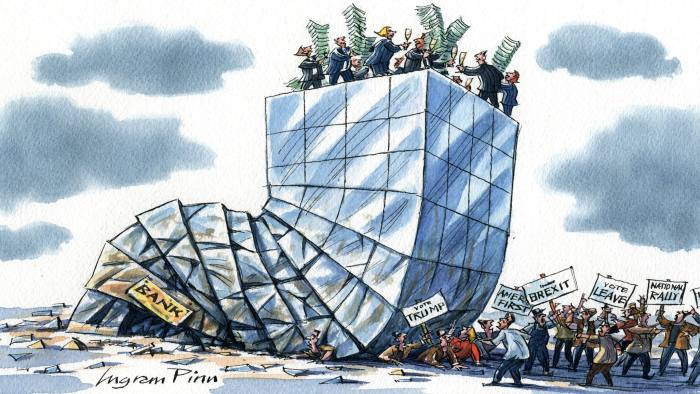 Populism is the true legacy of the global financial crisis

The legacy of the global financial crisis might have been a re-imagination of the market economy. Anything goes could have made way for something a little closer to everyone gains. The eloquent speeches and bold pledges that followed the crash — think Barack Obama, Gordon Brown, Angela Merkel and the rest — held out just such a prospect. Instead we have ended up with Donald Trump, Brexit and beggar-thy-neighbour nationalism.

The process set in train by the September 2008 collapse of Lehman Brothers has produced two big losers — liberal democracy and open international borders. The culprits, who include bankers, central bankers and regulators, politicians and economists, have shrugged off responsibility. The world has certainly changed, but not in the ordered, structured way that would have been the hallmark of intelligent reform. (Read more)

This year’s Brazilian election is entering a decisive phase. With official television advertising beginning on August 31, voters will be bombarded by electoral messages for 50 minutes every evening, forcing them to think about their options for president, governor, and members of congress and the state legislatures from now until October 4. And the choices are far from easy.

The most popular presidential candidate, former president Luiz Inácio Lula da Silva , is serving prison time on corruption charges and unlikely to be allowed to run; the next most popular candidate, Jair Bolsonaro, has been compared to none other than Donald Trump, a comparison he seems almost to embrace. Observers worry that he could not only finish in the top two in the first round of the election on October 7, but even win the runoff three weeks later to capture the presidency. (Read more)

When my dear friend Gauri Lankesh, a journalist who doggedly championed the cause of India’s increasingly persecuted Muslim and dalit (lower caste) minorities, was shot at point blank range in her driveway last year, it seemed that Indians had finally woken up to the fact that their 70-year-old liberal democracy was in trouble. They marched in the streets, organized protests, held candlelight vigils, and demanded an end to the lawlessness that had claimed Gauri’s life — as well as the lives of too many others.

But instead of heeding these calls and going after the sinister radical Hindu outfits that are widely suspected to be behind the killings, Prime Minister Narendra Modi’s Hindu nationalist party — BJP (Bharatiya Janata Party) — is encouraging local authorities to themselves descend into lawlessness. This week, the state of Maharashtra, which is in BJP hands, orchestrated simultaneous raids in several cities, ransacking the homes and offices of multiple human rights activists — lawyers, writers, journalists, and academics — arresting five. The supposed rap against these people is that they are (a) urban Naxalites or Maoists who instigated violence at a dalit event in January and (b) were involved in an alleged plot to assassinate Modi. (Read more)

Another Round in Australia’s Political Churn

Another Australian leader has been brought down by his own party, bringing the total number of prime ministers since 2010 to six, one short of the record of seven between 1901 and 1909, in the first decade of federation.

This particular coup came with a Machiavellian twist. The fallen prime minister, Malcolm Turnbull, thwarted his conservative rival Peter Dutton on Friday by transferring his support to another candidate, Scott Morrison, who was then elected prime minister by 45 votes to 40. It left the government divided between its hard-right and moderate factions, and the public bewildered by the weeklong conservative tantrum.

There is a warning for all advanced democracies in Australia’s political impatience: The churn in leaders doesn’t appease voters. It only increases their disillusionment with democracy. (Read more)

More than 50 years on, the Democratic Party’s national convention of 1968 continues to haunt the party and cast a shadow over US politics, writes James Jeffrey.

The signs before the Democratic National Convention convened in Chicago from August 26 – 29 in 1968 were never good.

Anti-war protesters began arriving in the city the week before, vowing to change the party’s policy toward the increasingly hated Vietnam War.

They included New Left radicals, long-haired hippies and so-called Yippies, members of the Youth International Party, a radical youth-oriented and countercultural offshoot of the 1960s’ free speech and anti-war movements fomenting against the US government. (Read more)