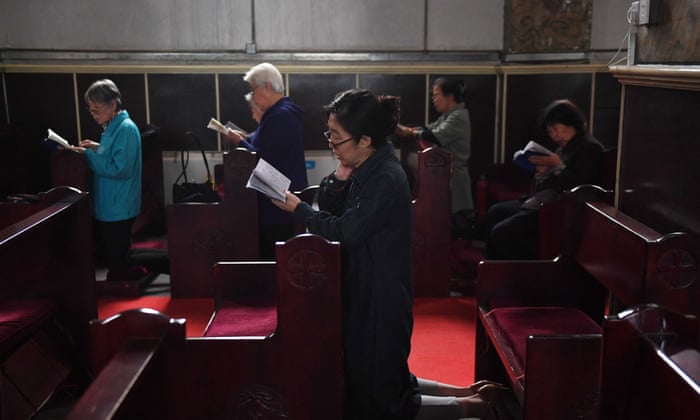 The Vatican and China: An Ideological Struggle

Every power in the world must now come to terms with China’s rise to superpower status; last week it was the turn of the Vatican, a global soft superpower. An opaque and ambiguous agreement seems to have resolved decades of diplomatic stalemate over the appointment of bishops for China’s 12 million Catholics, although that figure, too, is shrouded in uncertainty. The Chinese authorities have for decades demanded that they, and not some foreign power, should choose their country’s religious leaders; the Vatican has for just as long resisted. Now it appears that the pope will recover the power to choose bishops, but only from a shortlist nominated by the government.

The agreement enraged those who feel that there can be no compromise with the Beijing government. An unknown number of priests and bishops, perhaps 12, are still detained in China, and some are believed to have died in prison. This agreement does nothing for them. On the other hand, it does not involve full diplomatic relations between Beijing and Rome, which would require the Vatican to give up its recognition of Taiwan. (Read more)

Ethiopia’s Prime Minister Abiy Ahmed’s first five months in office have brought enormous change to the country. Thanks to astounding short-term gains, Ethiopians at home and abroad are feeling hopeful. But all is not well. Ethnic violence and tensions are on the rise.

Such conflicts are not new, but the levels of violence being witnessed today among some of Ethiopia’s more than 80 ethnic groups are disturbing. If Abiy wants to make a genuine attempt at real democracy, he must do away with tribal politics and make stronger strides towards national unity.

The renewed ethnic tension is unfolding on several fronts. Ethnic Amharas evicted from the Benshangul-Gumuz and Oromia regions are yet to receive government assistance. Most of the ethnic Oromos removed from Ethiopia’s Somali region in 2017 remain displaced. The ethnic Somalis evicted from Oromia in retaliation are also still displaced. Meanwhile, ethnic Gedeos removed from Oromia’s Guji areas are now living in appalling conditions in schools, closed factories and temporary camps.

In the southern cities of Awassa and Sodo, hundreds have died in ethnic violence. In the past two weeks alone, dozens from the Gamo, Ghuraghe and Dorze groups around the capital Addis Ababa have been killed by unidentified assailants.

A rally that was organised in Addis Ababa to protest the deaths was violently dispersed by police. The media reported that some residents were killed by government security forces. (Read more)

Jamal Khashoggi’s Disappearance Is Even Stranger Than It Seems

What in the world? No seriously, what the…? When it comes to Saudi Arabia these days, things could not get weirder or uglier. Last November, Saudi Arabia’s Crown Prince Mohammed bin Salman forced Lebanon’s Prime Minister to resign—from Riyadh in a television appearance that had all the characteristics of a hostage video. At the same time, Saudi authorities detained almost 400 people in the Ritz-Carlton over corruption charges, only to release them after they handed over significant sums of cash and assets in what appeared to be little more than a shakedown. This past spring and summer, the government began arresting women activists, some of whom had been at the forefront of the decades long fight to drive that ended with a lift on the ban in June, and declared them traitors. Then, in August, Saudi leaders lashed out at Canada over a tweet criticizing their treatment of oppositionists—canceling flights, preventing Saudi students on government scholarship from studying at Canadian universities, and transferring sick Saudis from Canada’s hospitals. All of this was going on against the backdrop of the ill-conceived war in Yemen.

And now, a Saudi journalist named Jamal Khashoggi—a onetime confidant of senior Saudi officials and princes—has vanished. He disappeared into Saudi Arabia’s Istanbul consulate on Oct. 2 and has not been heard from since. The Turks say he is dead, killed in the consulate by a hit team, with his body removed in boxes. The Saudis have declared this grisly tale nonsense and insist Khashoggi left the consulate not long after he arrived. (Read more)

This week, the United Nations Intergovernmental Panel on Climate Change released an ominous new report, warning that without a complete overhaul of the global economy within the next decade, the most devastating effects of climate change will be felt as soon as 2040. Has humanity already lost this battle with itself?

In this Big Picture, Carl Bildt rejects despair, noting that advances in renewable energies are proceeding faster than almost anyone expected they would. And Monica Araya and Carlos Manuel Rodriguez hold up Costa Rica as an example of how straightforward policies to realign incentives can rapidly decarbonize key sectors of the economy.

Meanwhile, Christiana Figueres and May Boeve show that a global mass movement is emerging to pressure the politicians who continue to drag their feet on the issue. Vinod Thomas suspects that this year’s extreme weather events could finally make climate change an election issue, particularly in the United States. And Peter Singer shows that even the courts have been brought into play, now that advocacy groups are suing the US government for its failure to take the climate threat seriously. (Read more)

Elections in Bosnia: More of the same, but there is a silver lining

Nothing much changes in Bosnia. A journalist colleague of mine used to quip that since 2006, the year when a major constitutional reform failed, he could write the same piece over and over again. The names, the issues, the concerns would be pretty much identical. The West continues to be outmaneuvered by cunning politicians beating the drum of nationalism to cling to power.

Elections seem to make only a marginal difference. That’s the takeaway from October 7 when elections were held both at the state level of Bosnia and Herzegovina (BiH) and within BiH’s two “entities,” the predominantly Bosniak- and Croat-populated Federation, and the Serb-populated Republika Srpska (RS). Voters turned out to elect the three members of the collective presidency and the lower house of the BiH legislature. They also chose the heads of the two entities and their respective legislatures. (Read more)