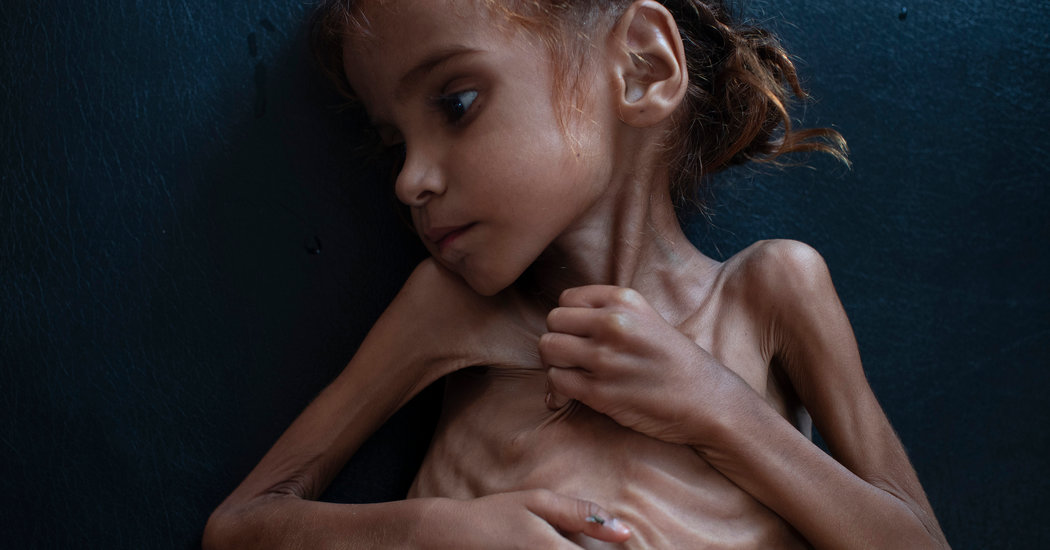 The Tragedy of Saudi Arabia’s War

CHEST HEAVING AND EYES FLUTTERING, the 3-year-old boy lay silently on a hospital bed in the highland town of Hajjah, a bag of bones fighting for breath.

His father, Ali al-Hajaji, stood anxiously over him. Mr. Hajaji had already lost one son three weeks earlier to the epidemic of hunger sweeping across Yemen. Now he feared that a second was slipping away.

It wasn’t for a lack of food in the area: The stores outside the hospital gate were filled with goods and the markets were bustling. But Mr. Hajaji couldn’t afford any of it because prices were rising too fast.

“I can barely buy a piece of stale bread,” he said. “That’s why my children are dying before my eyes.” (Read more)

Donald Trump embodies the spirit of our age

When Donald Trump spoke at the UN last month, the audience laughed at him. It was an unprecedented insult to an American president. But I have an uneasy suspicion that Mr Trump may have the last laugh. The 45th US president could yet go down as a leader who changed the course of history and embodied the spirit of an age.

Historic figures do not have to be good people, or even particularly intelligent. Mr Trump is a habitual liar, whose administration has set up detention camps for children. Rex Tillerson, his former secretary of state, is reputed to have called the president a “moron”. But none of that need stop Mr Trump from being what the philosopher Georg Hegel called a “world-historical figure”. (Read more)

The Pope, the Party and the Cardinal: Catholicism in China

In late September, the Vatican and Beijing signed a landmark agreement on the appointment of bishops in China.

The deal is historic, but also controversial. Some of China’s estimated 10 million Catholics welcome the rapprochement. Others are concerned that the Vatican was ceding too much power to Beijing. Particularly concerned are those in China’s “underground” Catholic communities, who claim loyalty to the pope alone and reject the Chinese Communist Party’s control over church affairs.

The terms of the agreement aren’t public, but people familiar with the matter say it allows for the Chinese government to nominate bishop candidates, and the pope to approve or veto them. It is likely to have long-term effects on China’s church leadership. (Read more)

How EU membership undermines the left

Let’s start with Brexit – because if you are genuinely interested in transcending either nation or state, you have to start with Brexit. It is leaving the EU that challenges and disrupts the British state in its contemporary form. Remaining in the EU means not challenging or disrupting the smooth operation of the actually existing political form of capitalist rule in Britain today. The EU is not a foreign superstate that rules over Britain. The EU is a political form through which the British government collaborates with other European governments in order to govern Britain. The other EU member states do the same for their own populations and territories. They collaborate with each other by constitutionalising various restrictions on economic policy, and by making law in intergovernmental forums. (Read more)

A Step Forward for Women in African Politics

On Thursday, the Ethiopian parliament elected its first female president, Sahle-Work Zewde. Though the role is largely ceremonial, it holds symbolic importance for women across the country and the continent, as Zewde will be the only female head of state in Africa. (Saara Kuugongelwa-Ahmadhila, prime minister of Namibia, is the only female head of government in Africa.) In her opening speech, she emphasized the importance of equality, telling MPs that if they thought she was talking too much about women, that she had only just begun.

Her election comes on the heels of another important step forward for Ethiopia, and neighboring Rwanda, who joined the meager ranks of countries with ministerial gender parity. In a cabinet reshuffle last week, Ethiopia’s Prime Minister Abiy Ahmed appointed ten female ministers, comprising half of the all cabinet posts. Days later, Rwanda’s President Paul Kagame announced that Rwanda’s new cabinet would also be gender-balanced. (Read more)