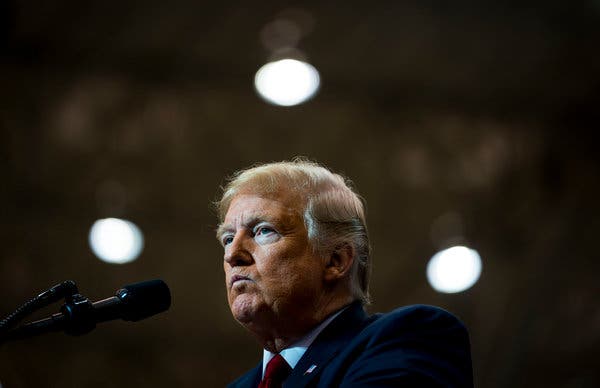 Donald Trump, it turns out, may have been the best thing that could have happened to American democracy.

No, I haven’t lost my mind. Individual-1 is clearly a wannabe dictator who has contempt for the rule of law, not to mention being corrupt and probably in the pocket of foreign powers. But he’s also lazy, undisciplined, self-absorbed and inept. And since the threat to democracy is much broader and deeper than one man, we’re actually fortunate that the forces menacing America have such a ludicrous person as their public face.

Yet those forces may prevail all the same.

If you want to understand what’s happening to our country, the book you really need to read is “How Democracies Die,” by Steven Levitsky and Daniel Ziblatt. As the authors — professors of government at Harvard — point out, in recent decades a number of nominally democratic nations have become de facto authoritarian, one-party states. Yet none of them have had classic military coups, with tanks in the street. (Read more)

Shrugging off the threat of sanctions from Brussels, Orban’s lawmakers approved a law Wednesday that will further tighten his hold over the country’s court system. Opposition lawmakers tried to prevent the opening of the parliamentary session and then whistled and jeered as the ruling coalition voted to create a new high court to deal with public-administration cases and brought it under the government’s oversight.

A third-consecutive election win in April gave Orban, 55, and his Fidesz party a constitutional majority, which made the vote a formality. The re-election also gave Orban a self-claimed mandate to continue the NATO member’s transformation into an “illiberal state” along the lines of Vladimir Putin’s Russia, frustrating EU efforts to maintain the unity underpinning the world’s largest trading bloc. (Read more)

The bright side of Britain’s Brexit chaos

One month ago, before British politics turned upside down, the country faced three possible futures. Prime Minister Theresa May was negotiating a compromise Brexit from the European Union, and her odds of prevailing appeared around 50 percent. A group of hard-liners in May’s Conservative Party wanted to crash out of the E.U. without a deal, and the odds of that costly result were around 30 percent. Finally, moderates wanted some way of postponing Brexit, or putting it to a second referendum. Their chances probably stood at around 20 percent.

Now consider a paradox. With today’s triggering of a no-confidence vote in the prime minister, Britain has descended into maximum “Game of Thrones” chaos. Yet the odds of a stabilizing outcome have brightened. Of course, all statements about British politics should be assumed to include the word “probably” at least twice. But a fair guess would be that the odds of a delay or a revote on Brexit stand at around 60 percent. The odds of some sort of compromise stand at 30 percent. The odds of crashing out are down around 10 percent. (Read more)

In Soviet times, Russia’s Jews told a joke about a man named Rabinovitch who was distributing pamphlets in Red Square. In a matter of minutes, the KGB had found him and taken him to headquarters. Only there did the agents realize that the sheets of paper were completely blank. “But there’s nothing written here,” one of them said. Rabinovitch said: “They know quite well what I mean.”

For two months, the French government has been unable to make head or tail of the blank sheets of paper handed out by the gilets jaunes, or Yellow Vests, this decentralized, leaderless movement that has no explicit agenda or demand apart from the abolition of a fuel tax. While Emmanuel Macron’s government has blindly concluded that this sudden, violent movement bereft of any clearly articulated purpose has no other goals, movements don’t block major intersections just to protest hikes in gas costs. (Read more)

DuPont Co. suspected its onetime partner in China was getting hold of its prized chemical technology, and spent more than a year fighting in arbitration trying to make it stop.

Then, 20 investigators from China’s antitrust authority showed up.

For four days this past December, they fanned out through DuPont’s Shanghai offices, demanding passwords to the company’s world-wide research network, say people briefed on the raid. Investigators printed documents, seized computers and intimidated employees, accompanying some to the bathroom.

Beijing leans on an array of levers to pry technology from American companies—sometimes coercively so, say businesses and the U.S. government. (Read more)