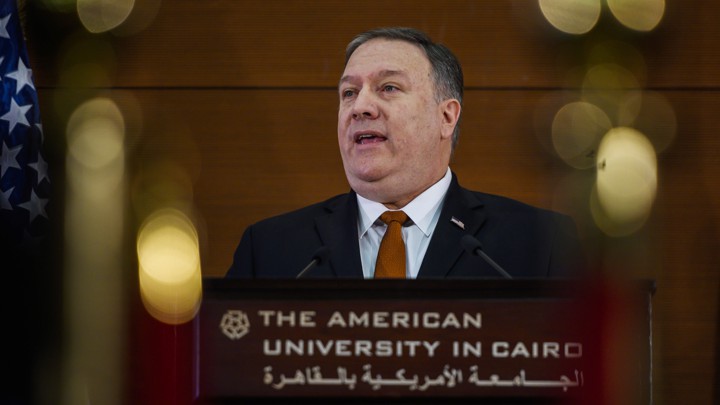 In the Middle East, Is Trump the Anti-Obama or Obama 2.0?

During a visit on Thursday to the nerve center of the Arab world, Mike Pompeo declared that reports of America’s departure from the Middle East under Donald Trump had been greatly exaggerated, and that it was Barack Obama who had abandoned the region—to devastating effect.

And yet the irony is that while the conduct of Obama and Trump in the Middle East couldn’t be more different, they’ve in fact ended up engaged in the same struggle: to extract the United States from the Mideast morass.

The U.S. secretary of state accused Obama—who 10 years ago in Cairo famously sought “a new beginning” between the United States and a billion-plus Muslims—of grossly underestimating radical Islamist ideology, willfully ignoring the dangers of the Iranian regime, and mistakenly perceiving the United States as a “force for what ails the Middle East.” This, he argued in a speech at the American University in Cairo, harmed hundreds of millions of people across the region and the world as isis “raped and pillaged and murdered,” Iran “spread its cancerous influence,” and the Syrian government “unleashed terror” by gassing its people, all in the face of American timidity. (Read more)

Viktor Orbán calls for anti-migration politicians to take over EU

“This is a topic that is radically transforming European politics, it’s the defining political process in Europe,” Orbán said at a rare press conference in Budapest on Thursday. “The party structures, traditionally left or right, are being taken over by a different dimension – those for migration and against immigration.” (Read more)

A Saudi teen who fled to Thailand to escape her allegedly abusive family has arrived in Canada after being offered asylum there.

Rahaf Al-Qunun left Bangkok for Toronto on Friday after a day of confusion over where she would be resettled. Canadian Prime Minister Justin Trudeau later told reporters his nation had accepted the request made by the UN refugee agency, UNHCR.

Canada’s Minister of Foreign Affairs Chrystia Freeland is expected to brief the media later on the 18-year-old’s case.

President Moon Jae-in of South Korea said Thursday that the visit to China this week by the North Korean leader, Kim Jong-un, heralded an imminent second summit meeting between Mr. Kim and President Trump to negotiate the terms of denuclearizing the North.

Mr. Moon held his New Year’s news conference in Seoul, South Korea, on Thursday, hours after Mr. Kim wrapped up a four-day trip to China, which included his fourth summit meeting with President Xi Jinping. China is considered the best buffer North Korea has against American pressure and sanctions as Mr. Kim prepares for a second meeting with Mr. Trump. He also consulted with Mr. Xi before and after his first meeting with Mr. Trump, which took place in Singapore in June. (Read more)

Anna Soubry, Brexit, and the rise of antagonistic politics

In a shocking video circulating ahead of parliament’s Brexit vote, Conservative MP Anna Soubry is seen being mobbed on the street outside parliament. A group of angry pro-Brexit protesters bark questions at her and taunt her with jibes of “Nazi” and “Fascist”. Their leader, James Goddard, wearing a high-vis yellow jacket, waves his phone around as he shouts at her. This small but vocal and intimidating group have been haunting parliament recently, getting in the faces of Remain-supporting MPs and journalists.

These people do have a right to protest. Free speech and free assembly are cornerstones of democracy. However, democracy also necessitates an acceptance that others may legitimately hold opposing viewpoints to our own and, with it, a willingness to listen to such views. (Read more)