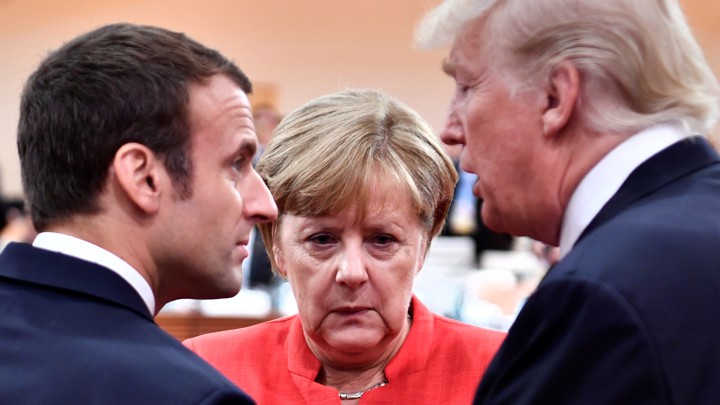 What the Iran Crisis Reveals About European Power

Donald Trump is forcing Europe to confront its own weakness.

The U.S. president’s bellicose policy toward Iran has, until now, been met with an unusual unity of opposition from Europe’s big three powers, the U.K., France, and Germany, as well as from the European Union itself. And yet, despite their combined economic weight and presence on the world stage, Europe’s principal players have proved largely powerless to do anything in the face of raw American hegemony.

The brute reality, as things stand, is that Europe does not yet have the tools—or the will—to project its power. The euro cannot be a credible alternative to the dollar as a reserve currency until it is radically reformed, and without a credible reserve currency, Europe’s financial might cannot match that of the United States. Even more fundamentally, there remain deep divisions within Europe over whether it should even seek to be a power, with or without Britain. (Read more)

Southeast Asian leaders on Sunday pressed their call for self-restraint in the disputed South China Sea and renewed their alarm over the U.S.-China trade war, with one leader warning it may spiral out of control.

The long-raging territorial conflicts and the protracted dispute between the two global economic powerhouses are high on the agenda in the final of two days of meetings of leaders from the Association of Southeast Asian Nations. It’s an annual summit steeped in diplomacy, protocol and cultural color in the Thai capital.

Facing regional predicaments such as the Rohingya refugee crisis in Myanmar, the leaders took the stage and clasped their hands together in a trademark ASEAN handshake to project unity. (Read more)

Millions of people will take to the streets around the world in the coming weeks to celebrate “Pride”. Those who find themselves doused in glitter or wrapped in rainbow flags may think this is merely an annual summer party of sexual and gender diversity. But, the last weekend in June anchors Prides around the world for a reason: it marks a queer uprising that took place at New York City’s Stonewall Inn in 1969.

Stonewall’s 50th anniversary is a moment to reflect on the riot that helped to globalise what many now call the “gay rights movement”.

In the early hours of June 28 1969, the New York Police Department raided the Stonewall Inn in an attempt to permanently close a bar that was violating licensing regulations. Police raids on Stonewall and other gay bars were routine but, on this particular night, local patrons refused to disperse or allow their friends to be arrested. These “queers” (such as drag queens, sex workers, trans women, gay men, lesbian butches), who came from various parts of the city to hang out at the bar, sung, threw objects, and used their bodies to resist the police invasion. The protests gathered momentum and continued throughout the week. (Read more)

Vladimir Putin has trumpeted the growth of national populist movements in Europe and America, crowing that liberalism is spent as an ideological force. In an FT interview in the Kremlin on the eve of the G20 summit in Osaka, Japan, the Russian president said “the liberal idea” had “outlived its purpose” as the public turned against immigration, open borders and multiculturalism.

Mr Putin’s evisceration of liberalism — the dominant western ideology since the end of the second world war in 1945 — chimes with anti-establishment leaders from US president Donald Trump to Hungary’s Viktor Orban, Matteo Salvini in Italy, and the Brexit insurgency in the UK. “[Liberals] cannot simply dictate anything to anyone just like they have been attempting to do over the recent decades,” he said. (Read more)

Did we ever really understand how the EU works?

The United Kingdom ought to have started the Brexit negotiations with the EU with one distinct advantage. As an insider of 40 years standing, the UK should have been well placed to anticipate virtually every move by the EU27. The Brexit talks should thus have resembled one of those divorce disputes where each party knows every foible of their former partner and is acutely aware of their vulnerabilities and strengths.

Bizarrely, however, this has not proven to be the case at all. Rather than making full use of their inside knowledge to pitch their case in the most skilful fashion possible, the British have instead blundered through much of the Brexit negotiation as if dealing with the EU for the very first time. This highlights how superficial has been the understanding of the system acquired by much of the UK political class during the four decades spent inside the system. (Read more)