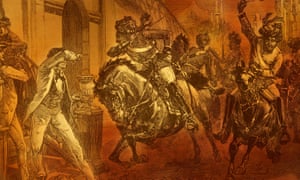 Britain’s story of empire is based on myth. We need to know the truth

These days we’ve become wearily accustomed to depictions of Brexit Britain as oppressed by a villainously imperial Europe. Annexed “without permission”, Nigel Farage claimed melodramatically, defending Brexit party MEPs against charges of “disrespecting” the European Parliament. In a particularly far-fetched comparison, Ann Widdecombe MEP has compared Brexit with the resistance of “slaves against their owners” and “colonies against empires”. Prime ministerial frontrunner Boris Johnson too has spoken of Britain’s supposed “colony status” in the EU though, with a familiar double standard, he also believes that it would be good if Britain was still “in charge” of Africa.

These bizarre comparisons can be made and go unchallenged because the stark fact remains that most Britons know very little about the history of the empire itself, still less the way in which its long afterlife profoundly shapes both Britain and the wider world today. (Read more)

The death threats started in 2015, when Walter Lübcke defended the refugee policy of Chancellor Angela Merkel. A regional politician for her conservative party, he would go to small towns in his district and explain that welcoming those in need was a matter of German and Christian values.

Hateful emails started pouring in. His name appeared on an online neo-Nazi hit list. His private address was published on a far-right blog. A video of him was shared hundreds of thousands of times, along with emojis of guns and gallows and sometimes explicit calls to murder him: “Shoot him now, this bastard.”

And then someone did. (Read more)

Britain’s man in the US says Trump is ‘inept’

Britain’s Ambassador to Washington has described Donald Trump as ‘inept’, ‘insecure’ and ‘incompetent’ in a series of explosive memos to Downing Street.

Sir Kim Darroch, one of Britain’s top diplomats, used secret cables and briefing notes to impugn Trump’s character, warning London that the White House was ‘uniquely dysfunctional’ and that the President’s career could end in ‘disgrace’.

Does watching television make people stupid? Are stupid people more likely to vote for populist parties? And can these effects linger for years, or even decades?

If you had asked me a few days ago, I would have been highly skeptical of these claims. They sound far too much like the sort of thing educated people want to believe. But a meticulous new paper published in the American Economic Review, one of the world’s most prestigious social-science journals, suggests that there might be truth to these clichés.

In the study, three economists, Ruben Durante, Paolo Pinotti, and Andrea Tesei, were able to provide strong evidence for a shocking set of conclusions: Watching a lot of entertainment TV does seem to have an adverse impact on your intelligence. And it also makes you more likely to vote for populist parties. (Read more)

A weird and disturbing change has come over the Conservative Party.

I’m not talking about the raging divisions and defections over Brexit, or the fact it seems to be preparing to get rid of yet another leader — after all, civil war over Europe and regicide are longstanding Tory traditions.

I’m talking about a much more unusual and unprecedented phenomenon: the fact that the Tories, both in government and more generally, seem to have stopped talking and thinking about economics. (Read more)