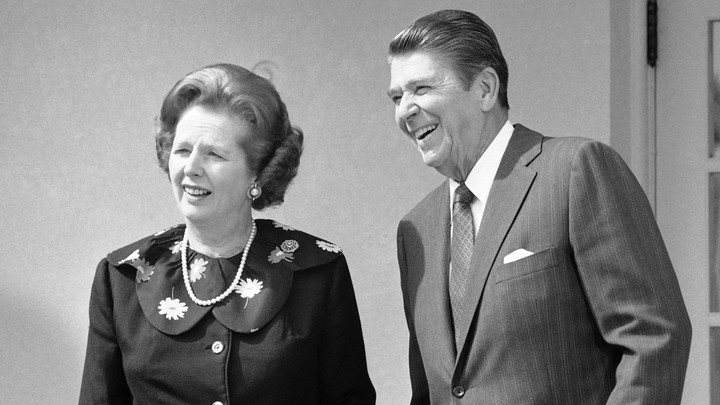 This Is How Reaganism and Thatcherism End

In an Italian hotel ballroom of spectacular opulence—on red velvet chairs, beneath glittering crystal chandeliers and a stained-glass ceiling—the conservative movement that once inspired people across Europe, built bridges across the Iron Curtain and helped to win the Cold War came, finally, to an end.

The occasion was a conference in Rome last week called “God, Honor, Country: President Ronald Reagan, Pope John Paul II, and the Freedom of Nations.” Inspired by the Israeli writer Yoram Hazony, convened under the banner of “National Conservatism,” this event was co-organized by Chris DeMuth, a former president of the American Enterprise Institute (in the era when it supported global capitalism and the Iraq War) and John O’Sullivan, a former speechwriter for British Prime Minister Margaret Thatcher. O’Sullivan now runs the Danube Institute, which is funded, via a foundation, by the Hungarian government. The conference itself was funded, according to DeMuth, by an anonymous American donor. This was the successor to the National Conservatism Conference held in Washington, D.C., last year. That occasion featured a strange agglomeration of new and old conservatives, including both John Bolton and Tucker Carlson, people who still talk hopefully about shrinking the state and those who want to enlarge it, people still jockeying to be relevant and people full of confidence that they now are. (Read more)

“Populism” can be a helpful term—but in 2020, it’s being increasingly misused

Populism is, in 2020, all around. It can be invoked to explain the Brexit vote; the election of Trump; the popularity of Modi; the rise of far-right parties across Europe. But it can also explain the rise of Corbyn, the fall of Corbyn, the election of Boris Johnson, and the renewed popularity of the Scottish independence movement. Only Liverpool’s 22-point lead at the top of the football league has not yet been explained by ‘populism’ (and that is, surely, only a matter of time).

Populism as a term has its uses, of course. As a political concept, it seeks to explain how political parties and leaders win power by making promises to “ordinary people,” purporting to address grievances that have previously been ignored by elite groups. Conceptually, it is a useful way of explaining how figures like Nigel Farage or Donald Trump can run on a ticket that seeks to kick against the establishment, despite their own elite economic and social status. (Read more)

Nationalism is winning – on both sides of the Scottish border

More people in England have already forgotten the name of the Scottish finance minister who resigned last week than ever knew it before the scandal broke. Derek Mackay was hardly a celebrity in Scotland, but his disgrace made news there for more than a few hours. Mackay had compulsively messaged a 16-year-old boy on social media, calling him “cute” and offering him trips out. The behaviour was “foolish”, he said. Opponents called it predatory.

Questions followed about the Scottish National party’s handling of the matter and how its leader, Nicola Sturgeon, should patch the hole in her cabinet, but England had tuned out by then. Scandal is union-wide; aftermath is devolved. This isn’t new. People have limited bandwidth for politics, and the SNP doesn’t govern England. Holyrood is a niche interest even for Westminster nerds. But the longer this segregation of political cultures goes on, the harder it gets to argue for a United Kingdom. (Read more)

The New Spheres of Influence (£)

In the heady aftermath of the Cold War, American policymakers pronounced one of the fundamental concepts of geopolitics obsolete. Secretary of State Condoleezza Rice described a new world “in which great power is defined not by spheres of influence . . . or the strong imposing their will on the weak.” Secretary of State Hillary Clinton declared that “the United States does not recognize spheres of influence.” Secretary of State John Kerry proclaimed that “the era of the Monroe Doctrine is over,” ending almost two centuries of the United States staking claim to its own sphere of influence in the Western Hemisphere. (Read more)

From Chernobyl to the Coronavirus (£)

My grandfather called just as I finished packing my suitcase—a hard task when you don’t know whether you will ever return. “Don’t you dare leave Kyiv now,” he hissed into the receiver. “You will ruin your life forever. They never forgive this kind of thing.”

It was the last day of April 1986, and I was 16, staying with my grandmother in Kyiv while my parents lived in New York. My girlfriend was the daughter of a deputy minister of commerce; a few other classmates at Secondary School Number 153 were even better connected. (Read more)