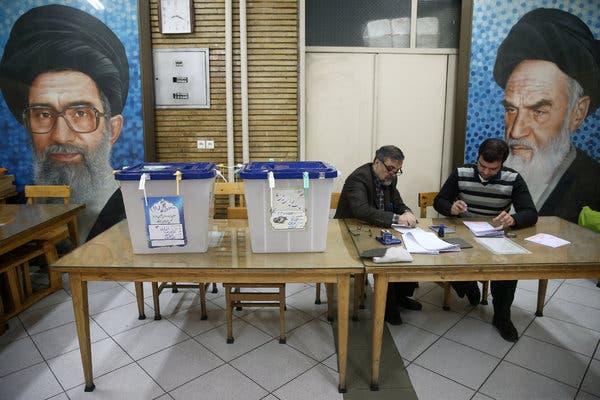 What Does the Iranian Election Tell Us?

On Friday Iran held its 11th parliamentary elections since the foundation of the Islamic Republic in 1979, and the first since the Trump administration renewed sanctions on Iran and battered its economy.

The Iranian electorate faces a perpetual dilemma on whether to participate or boycott the elections as the choice of candidates is limited and the Guardian Council — a constitutional committee made up of six clerics and six jurists that vets the electoral candidates — bars those seen as critical of the regime or deviating from its positions. (Read more)

America’s newest foreign policy thinktank threatens to radically realign the politics of US national security. At a conference on Capitol Hill in late February, the Quincy Institute for Responsible Statecraft showcased what it calls its “transpartisan” left-right alliance of “realists”. Their goal is to drop democracy promotion, humanitarian intervention and stop the US from fighting “endless wars”.

Quincy, which launched in December 2019, has announced its intention to America’s political class that it will challenge the mentalities that have ruled US foreign policy since the 1991 Gulf war. Quincy favours what it calls “strategic restraint”, prioritising diplomacy, the US as a military backstop not as global enforcer of first resort.

In many ways, but with important qualifications, it’s an approach that systematises elements of the gut instinct driving President Donald Trump’s approach to the world. (Read more)

1984: When the Delhi Police abetted an attack on another minority

With Ved Prakash Surya, the deputy commissioner of police for northeast Delhi, standing beside him, the BJP leader Kapil Mishra delivered an incendiary speech at Maujpur Chowk, near Jaffrabad, on 23 February. Mishra warned that if the  sit-in protest against the Citizenship (Amendment) Act at the Jaffrabad metro station was not cleared within three days, the matter would be taken out of the Delhi Police’s hands. Surya’s quiet presence besides a defiant Mishra seemed to send a clear message—the threat had the support of the Delhi Police.

The Hindu mobs of northeast Delhi did not wait three days. From the very next day, news broke of wide-scale violence in northeast Delhi neighbourhoods.  As Surya’s passive demeanour had foretold, videos surfaced of the Delhi Police either quietly watching as Hindu mobs attacked Muslim neighbourhoods, or of personnel participating in the attacks. In one particularly chilling video, members of the Delhi Police can be seen forcing five individuals, visibly severely injured and lying on the ground, to sing the national anthem.  Police personnel could be heard abusing the five men, taunting them with the word “azadi,” and urging them to sing better. On 27 February, one of the men, identified in news reports as Faizan, a resident of Kardampuri, died from his injuries. (Read more)

Africa is a Country

Before majority rule in 1980, Rhodesia (colonial Zimbabwe) was briefly a member of FIFA, and even played a World Cup qualifying match in 1969. A year later, the team was suspended from global football. In the 1970s, football continued domestically under John Madzima, one of the vice-presidents of Rhodesia’s national football association, who successfully launched a coup against the white leadership. After independence, Madzima became the first head of the Zimbabwe Football Association (ZIFA). ZIFA has had organizational and financial difficulties and few continent-wide successes. Nonetheless, football has a profound social and political legacy from the colonial period, perhaps the only area of social life under black control.

Football passed from industrializing Britain to the colony then known as Southern Rhodesia in 1890 by soldiers, and later missionaries and white settlers. Sport was central to white identity. Even mining baron Cecil Rhodes, the colony’s namesake, was an avid sportsman. For whites, football served an important purpose: a way of building a (white) Rhodesian identity. White settlers had high rates of emigration and often lived in rural areas. (Read more)

On behalf of all ‘future historians’, leave us out of your Brexit rants

The appeal to the future historian is a common trope in times of crisis. The historian of the future is pictured as a horrified figure, peering back at the madness of contemporary life. So, people claim that the future historian will be baffled, or alarmed, or confused by what is going on right now. Historians of the future, who are rational adults, will not understand why we behave in the ridiculous ways that we do. This functions as a sort of gentle chiding, a call for us to be more sensible. (Read more)