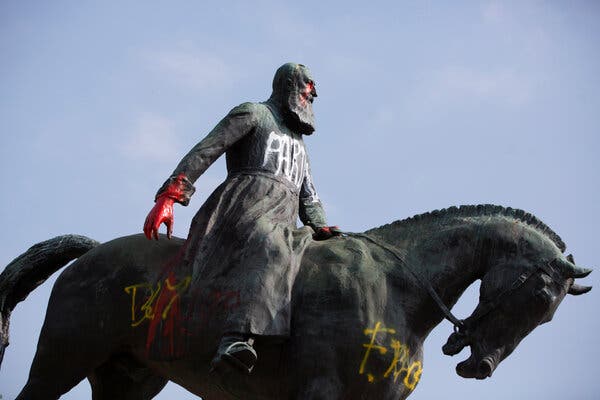 Colonialism Made the Modern World. Let’s Remake It

In the past few years, decolonization has gained new political currency — inside the borders of the old colonial powers. Indigenous movements have reclaimed the mantle of “decolonization” in protests like those at Standing Rock against the Dakota Access pipeline. Students from South Africa to Britain have marched under its banner to challenge Eurocentric curriculums. Museums such as the Natural History Museum in New York and the Royal Museum for Central Africa in Brussels have been compelled to confront their representation of colonized African and Indigenous peoples.

But what is “decolonization?” What the word means and what it requires have been contested for a century. (Read more)

Data-driven elections are here to stay. The social media age provides political parties with the opportunity to gather ever-more information on the electorate. More personalised appeals to voters are the result. Alongside these newer approaches, older, more direct methods of courting voters are the subject of renewed attention. Grassroots canvassing, involving face-to-face contact with potential voters, remains popular.

Yet both of these approaches – up-close and personal, and data-driven – are far from novel in British politics. They flourished throughout the mid-Victorian period – indeed, the structure of the British electoral system encouraged the Scottish Conservative party in particular to pursue both strategies simultaneously. (Read more)

The Rohingya Genocide and the ICJ: The Role of the International Community

When it comes to Myanmar, and the plight of its Rohingya people in particular, the international community has consistently failed to adequately respond when faced with serious risks, or even the actual commission of, mass atrocities.

The words “prevention” and “never again” ring hollow when the world’s most powerful, including the United Nations Security Council, did little as a genocide against the Rohingya was unfolding in Myanmar’s Rakhine State. Most governments simply failed to act when action to prevent escalation and respond to atrocities was most needed. The only formal response of the Security Council to the genocide against the Rohingya was the adoption of a November 2017 Presidential Statement – three months after the start of the Myanmar military’s abusive “clearance operations.” Individual governments, meanwhile, were slow to impose sanctions and withdraw support for Myanmar’s military, if they did so at all. (Read more)

Trump is the election crisis he is warning about

On Thursday morning, minutes after the worst U.S. economic data in seventy years were released and barely two hours before an American hero who risked his life for the right to vote was laid to rest, the President of the United States proposed delaying this fall’s election. Amid the coronavirus pandemic and widespread remote voting, Donald Trump said that it would be the most “INACCURATE & FRAUDULENT Election in history.” Why shouldn’t the U.S. “Delay the Election,” he asked, “until people can properly, securely and safely vote???”

It was not the first time that the President has raised this particular canard—and a canard it is, a radical move that is not within his power to make happen—but it was by far his most inflammatory, destabilizing, and provocative attempt yet to call into question the legitimacy of the November election, in which he is trailing the Democratic candidate, Joe Biden, in virtually every poll. Has there ever been a President who has done more to undermine American democracy? Trump himself has become the crisis of confidence in our political system that he warns about. He is his own self-fulfilling prophecy. (Read more)

Will the Left Get a Say in the Biden Doctrine?

Over the past few years, a loose coalition of activist groups, think tanks, and policy-makers dedicated to ending the post-9/11 forever war has asserted itself in foreign policy debates. As recently as February, when Bernie Sanders appeared to be the front-runner for the Democratic presidential nomination, it seemed possible that US foreign policy was on the verge of turning toward a less militarized and interventionist approach. Sanders and the other major progressive candidate in the race, Elizabeth Warren, had foreign policy advisers who advocated slashing defense budgets and reinvesting in diplomacy to confront nonmilitary threats.

But Joe Biden’s decisive victory over Sanders dealt a blow to those hopes. For decades, Biden has been a representative figure of the mainstream foreign policy establishment, the so-called Blob. He supported the Iraq War, is close with Israeli Prime Minister Benjamin Netanyahu, and has premised his campaign on a restoration of the Obama era. (Read more)