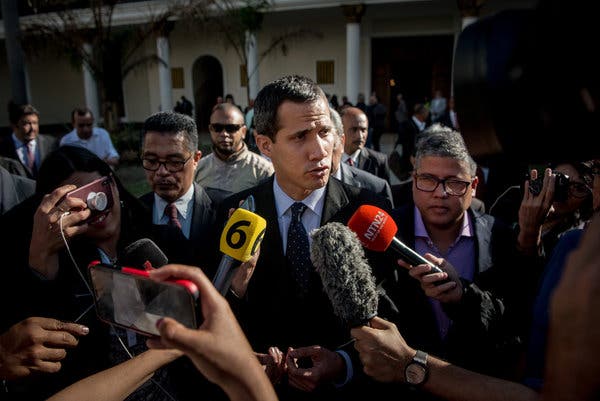 An Urgent Call for Compromise in Venezuela

Over the past two weeks, the United States, with the support of several countries in Latin America, has recognized the government of Juan Guaidó, the president of Venezuela’s National Assembly, and given it control over the country’s oil revenues. By doing so, it has entered a dangerous game of chicken with the Venezuelan military: Abandon President Nicolás Maduro or face the devastation of the Venezuelan economy. The message is stark: Change regime or starve.

The United States is acting with typical bravado, assuming that all will be over soon: Mr. Maduro will leave, sanctions will be lifted and Venezuela and the United States will benefit. Mr. Maduro is widely despised inside and outside Venezuela, so many countries are falling in line with the Trump administration’s gambit. (Read more)

While Europe was in the early days of the Renaissance, there were empires in the Americas sustaining more than 60m people. But the first European contact in 1492 brought diseases to the Americas which devastated the native population and the resultant collapse of farming in the Americas was so significant that it may have even cooled the global climate.

The number of people living in North, Central and South America when Columbus arrived is a question that researchers have been trying to answer for decades. Unlike in Europe and China, no records on the size of indigenous societies in the Americas before 1492 are preserved. To reconstruct population numbers, researchers rely on the first accounts from European eyewitnesses and, in records from after colonial rule was established, tribute payments known as “encomiendas”. This taxation system was only established after European epidemics had ravaged the Americas, so it tells us nothing about the size of pre-colonial populations. (Read more)

Hamed is a child of the revolution. His parents were among the thousands of protesters that took part in the overthrow of the monarchy and brought Iran’s Islamic Republic into being 40 years ago next week. His father joined the Revolutionary Guards to defend the system and fought for its survival in the brutal Iran-Iraq war that cost at least half a million lives.

Like more than 50 per cent of Iran’s youthful population Hamed, 38, has never known anything other than the theocratic state. But ahead of its 40th anniversary, the business graduate questions why his parents’ generation pushed so hard to topple the Pahlavi dynasty that ran the country between 1925 and 1979. It was a “mistake”, he says, that he is conscious not to repeat. (Read more)

Many working-class people believe in Brexit. Who can blame them?

We are two and half years away from the referendum, and only a few weeks from the date we are due to leave the European Union. Parliament and the country are at odds: the only thing that unites any part of public opinion is that our political system is not working for anyone. Admittedly, I am enjoying the irony. The Conservatives came to power almost ten years ago with the narrative that Britain was broken – and what they really meant was that they intended to set their sights on the poorest in our society. They would make Britain work by cutting public services, axing thousands of secure jobs, while encouraging the ‘Uber-job’, and the ‘Amazon-serf’. George Osborne’s speech in 2012 at the Conservative party conference, where he spoke of his dislike of those hiding behind closed blinds claiming benefits, was a sign of things to come. (Read more)

The past year placed considerable strain on the transatlantic security relationship. Donald Trump’s antagonism towards NATO and his dismissive comments towards British politicians makes him the most unpopular American president in Britain since James Madison. Meanwhile, Britain’s convulsion in the politics of Brexit has led some policymakers looking beyond NATO and the EU to a rapprochement with the old Commonwealth and the United States—what some romanticists term the “Anglosphere.”

In many ways this is old wine in new bottles. One hundred years ago, British delegates at the Paris Peace Conference pursued very similar diplomatic and security aims: the creation of an Anglo-American world order.

We often view the origins of the “special relationship” which grew up between Britain and America during the Second World War through the lens of elite British and American policymakers. This perspective overlooks the important role of powerful figures from the self-governing Dominions of Australia, Canada, New Zealand, and South Africa played in forging transatlantic ties in the aftermath of Versailles. These individuals, many of whom feared the gradual decline of Britain’s global power, became the most fervent supporters of an informal alliance between a more internationalist United States and a devolved British Commonwealth of co-equal partners. (Read more)