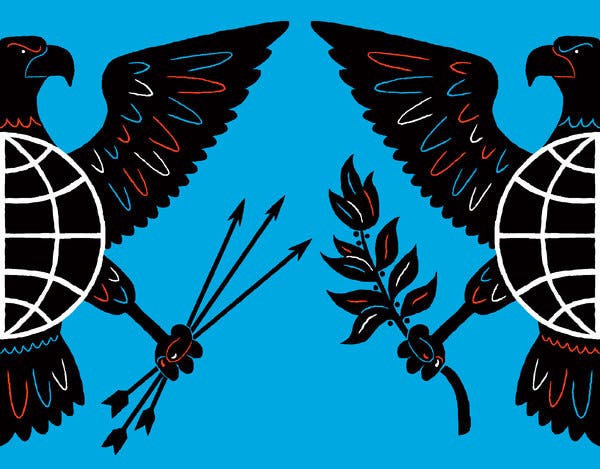 A Clash Is Coming Over America’s Place in the World

In the past several months, a meaningful debate has finally started to emerge over America’s role in the world. Politicians and analysts — left, right and center — are conceding that longstanding mistakes have brought the United States to an uncertain moment. Provoked by President Trump, they are concluding that the bipartisan consensus forged in the 1990s — in which the United States towered over the world and, at low cost, sought to remake it in America’s image — has failed and cannot be revived.

But the agreement ends there. Foreign policy hands are putting forward something like opposite diagnoses of America’s failure and opposite prescriptions for the future. One camp holds that the United States erred by coddling China and Russia, and urges a new competition against these great power rivals. The other camp, which says the United States has been too belligerent and ambitious around the world, counsels restraint, not another crusade against grand enemies. (Read more)

Theresa May’s aim is to convert fear of a no-deal Brexit into acceptance of her bad deal, which would leave the UK at the EU’s mercy. In the end, the rhetoric about “taking back control” has come down to a choice between suicide and vassalage. This march of folly needs to be stopped, for the UK’s sake and Europe’s. The only politically acceptable way to do this is via another referendum. That is risky. But it would be better than sure disaster.

Let us count the ways in which what is now happening is quite insane. In just over a month, the UK might suddenly exit from the EU. But the government and business are unprepared for such a departure: to take one example, the government is still fighting over what farm tariffs to impose. Such a no-deal Brexit would damage the UK — and the EU. If a no-deal exit did happen, negotiations would need to restart at once, but in a far more poisonous and, for the UK, more unfavourable context. (Read more)

The Feb. 10 announcement that 81-year-old Algerian President Abdelaziz Bouteflika would seek a fifth term in office has confirmed and confounded expectations in equal measure.

Few would deny that the incumbent’s health is poor. Since suffering from a devastating stroke in 2013, he has rarely appeared in public. Rumors of ill health are rife. In 2017, the abrupt cancellation of a diplomatic visit by Angela Merkel was enough to spark rumors of the president’s death.

However, after nearly two decades in power, the announcement of Bouteflika’s fifth bid for the presidency provides further evidence of the Algerian leadership’s unwavering commitment to safeguarding the country’s stability. Faced with the potentially destabilizing conflict between maintaining a generous subsidy package at home and falling hydrocarbon prices and shifting market tastes abroad, it is not yet clear how well equipped Algiers’ entrenched status quo may be to navigate the stormy weather ahead. (Read more)

Kashmir: India and Pakistan’s escalating conflict will benefit Narendra Modi ahead of elections

Tensions in the Kashmir region were already building after more than 40 Indian troops were recently killed by a suicide bomber. India’s “pre-emptive strike” over the disputed border on Tuesday – the first of its kind by India since it went to war with Pakistan in 1971 – has escalated the situation further. India said it had targeted a terrorist training camp and accused Pakistan of violating a 2003 ceasefire, while Pakistan now claims to have shot down two Indian fighter jets.

The origins of the Kashmir conflict lie in British imperial disengagement from the subcontinent. At independence in 1947, the unpopular Hindu Maharaja of Kashmir was faced with invasion by Pakistani tribesmen. He turned to India for help, signing the treaty of accession that took Kashmir into the Indian Union. India sent troops to Kashmir and so began the first war between India and Pakistan. (Read more)

As you may have noticed some of the mainstream media are slightly hostile and critical,” the politician tells a rally of the faithful in Broxtowe. They laugh, indulgently. “They’re very unkeen on relating to the issues people face.”

He decides to single out one media organisation that has particularly displeased him: “I did an interview with Sky last night. It was 14 minutes, the interview. We got to, I think, minute 12, before I intervened and said, ‘Is there any chance that anybody other than an MP could be referred to in any of your questions?’” The crowd are clapping heartily by this point. “And we could actually talk about the homeless, the poverty, the hospital waiting lists.” (Read more)